LONDON, England — Best known as the singer/synthesist behind the Top 5 smash hit “She Blinded Me With Science” and as the co-inventor of the Beatnik polyphonic ringtone engine, Thomas Dolby today announced his latest creation: The Floating City is a rich transmedia game with a living world that changes and reacts to player contributions. It uses web browsers, social networks, and even smart phones and iPads as a way for fans to access his latest musical endeavors.

The Floating City is open for registration from today at http://www.floatingcity.com. Gameplay commences on June 22nd at 5pm GMT. Players from around the world will form tribes and collaborate to earn free music downloads, merchandise and concert tickets. The leading tribe will even win the right to stage a private concert at which Thomas Dolby and his band will perform his forthcoming album in its entirety.

Completely free to the public, The Floating City is a casual game that hooks you into building a whole story world with your tribe — as deep as you want to go. It runs on a standard web browser, smartphone or iPad without additional software installation. It is targeted at players of all ages, regardless of whether they are familiar with Thomas Dolby’s catalog. But diehard fans of the five-time Grammy™-nominated songwriter will be delighted to find that The Floating City integrates characters, places, and objects named in every one of his albums going back to the beginning of his career . . . and before.

“The Floating City is set against a dystopian vision of the 1940s that might have existed had WWII turned out a lot differently,” says Dolby. A global energy experiment went haywire, the Earth’s magnetic fields have been reversed, and the planetary climate system violated. Science has betrayed us: now what must the species do to survive?

Survivors explore a fictional Google map, forming tribes and trading relics amidst a bizarre sea-going barter society. As they struggle to unravel the enigma that is The Floating City, players can haggle over merchandise and music downloads — including brand new songs from the much anticipated CD A Map of the Floating City, Dolby’s first album in 20 years, which will be released following the climax of the game.

“This is a brilliant concept,’ said writer/economist Steven Levitt. “It’s a cross between ‘Freakonomics’ and ‘Burning Man,’ with a backstory that would have made J.G. Ballard proud.”

Thomas Dolby became a huge star in the ’80s when his songs “She Blinded Me With Science” and “Hyperactive” topped the Billboard Hot 100 chart and were on constant rotation at MTV. His unique keyboard playing led to guest performances with the likes of David Bowie (Live Aid), Stevie Wonder (Grammy™ awards) and Roger Waters (The Wall) and he became a top producer, garnering five Grammy™ nominations.

Dolby abandoned the music business in the 1990s to found Beatnik Inc., a Silicon Valley tech company that built the ringtone synthesizer embedded in over 3 billion mobile phones worldwide. Now retired from Beatnik, he has returned to music and has been completing his first studio album in more than 20 years.

The Floating City game consolidates Dolby’s reputation as one of the foremost pioneers of electronic alt-culture. On hearing of the game, counter-cabaret diva Amanda Palmer commented: “Thomas Dolby is to Steampunk what Iggy Pop was to Punk!” 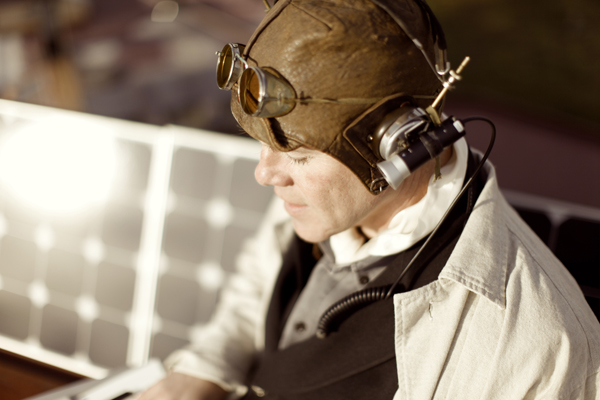