I’m excited to be taking part in the 15th anniversary of @recordstoreday with a limited edition blue colour reissue of my 1984 single ‘Hyperactive’. You can get a copy from a participating indie record shop near you exclusively on #RSD22: https://recordstoreday.co.uk/stores/

This song is for Matthew, with all my love. -[TMDR]

Matthew Seligman has suffered a catastrophic haemorrhagic stroke from which he won’t recover. His ventilator was gradually withdrawn until the inevitable end. I am so sad to have to bear this terrible news. I have loved him as a friend and a fellow musician for 40 years.”

Matthew has been on a ventilator in an induced coma for two weeks, after being admitted to St George’s London with Covid-19. He has a partner and two kids living in Wimbledon. He has no other close relatives, as his parents are gone and his brother passed away a month ago.

I don’t have words.

When his fans took part in a poll to select the most apocalyptic Thomas Dolby song, he promised to sing the winner ‘One Of Our Submarines’ in a livestream from his bedroom. Here’s an excerpt, plus some storytelling about playing at The Wall with Roger Waters in Berlin. And finally a COVID-19 ‘get well’ message to his friend and bass player, Matthew Seligman, with a song they co-wrote, ‘Neon Sisters.’

March 25, 2020: For the past five years I’ve been teaching an undergraduate degree course in Music Composition for Film and Games at Johns Hopkins University’s Peabody Conservatory in Baltimore, USA. Many people have asked me if there’s a way to audit, or sit in on my classes. Well up until now the answer was No. But as of this week all our classes have migrated online. So if you’re curious, here’s an opportunity to experience one of my classes!

This week’s freshman class is Scoring for Comedy, Part 1.

For over three decades Thomas Dolby Robertson has crafted a career that blends music and technology. An early star on MTV, his intelligent videos and songs like “She Blinded Me With Science” and “Hyperactive” became huge hits, standing the test of time. His keyboard and production work put him in the studio and on stage with the likes of David Bowie, Stevie Wonder, Roger Waters and Joni Mitchell, garnering him numerous awards and five Grammy™ Nominations. Get Tickets NOW.

Thomas is set to perform a one-hour set to headline the always incredible Moogfest, this year being held in Durham, NC from April 25-28th with an amazing lineup of talent. Dolby will make three appearances at Moogfest, including a live performance and a two-way interview with Buzzfeed News Sr. Investigative Reporter and 2018 Pulitzer Prize finalist Jason Leopold. Dolby and Leopold will converse on their shared passion of truth seeking among creative topics. A professor at Johns Hopkins University and digital audio pioneer, Dolby will also perform a musical set on Saturday evening at the Carolina Theatre combining his stylized use of set, visuals and music for enhanced storytelling. Dolby will open the evening with a visual chronicle of how his songs came into being through live projections of his audio workstation as the individual layers are added to form the entire song as its performed.
Buy Tickets!

Thank you for all the years of music and wonder, now make a wish and blow out those candles!

BALTIMORE, Md. — Thomas Dolby — musician, video director, author, and now a university professor — is set for a short U.S. tour in July and August 2018 with a show titled An Evening of Music and Storytelling With Thomas Dolby.

The tour coincides with the July release of his 2-CD greatest hits collection Hyperactive, coming July 27, 2018 as part of BMG’s Masters Collection series.

In this intimate solo performance, Thomas will allow members of the audience to randomly pick songs from his 30-year catalog. He will tell the story behind the genesis of each, while simultaneously deconstructing its musical parts, synth sounds, and lyrics. The resulting music will be output from his laptop and keyboards, and projected on a screen behind him, along with personal photos and memorabilia. Each performance will therefore be a slightly different audiovisual experience, with surprises each night.

Aside from his successful solo hits such as “She Blinded Me With Science” and “Hyperactive,” Dolby is known as a synthesist and producer for the likes of David Bowie, Roger Waters, Stevie Wonder, Foreigner, Def Lepperd, George Clinton, and Joni Mitchell. His acclaimed memoir The Speed of Sound (Flatiron/Macmillan) was an Amazon Bestseller in its category, and a 2016 NPR Book of the Year.

“These shows will give me an opportunity to expand on some of the stories in my book — without pulling any punches!” said Dolby. “I’ll be unstitching the songs, as I’ve found audiences love to get a peek ‘under the hood’ and into an artist’s creative methods.”

Since completing 12 years as Music Director of the TED Conferences in 2012, Prof. Dolby has been teaching music at Johns Hopkins University in Baltimore, Md. This Fall he will launch a new undergraduate degree course at the Peabody Institute, focusing on music composition and 3D sound design for virtual and augmented reality — the first of its kind at a major U.S. university.

The tour is sponsored in part by Roland Corp., manufacturer of the world’s most iconic synthesizers, guitar pedals and drum machines.

Weds July 25th—Largo at the Coronet, Hollywood CA (SOLD OUT)

Sun Aug 5th—VENUE CHANGE: The Space Ballroom (tickets) All previous tickets for the State House will be honored.

This summer I will be playing a select handful of shows entitled “Thomas Dolby: An Evening of Music and Storytelling” (Presented by Roland Corp.)

In this intimate solo show I will deconstruct half a dozen of my favorite songs, telling the story behind their creation while breaking down the beats, chords, keyboard parts, and synth sounds, looping and layering them until I’ve recreated the entire song. My simple rig is a couple of keyboards, a drum pad, and a MacBook, the output of which is projected on a screen behind me, so the audience can see ‘under the hood’ while I build and perform each piece.

Here are the dates:

Congratulations to Thomas on his Roland Lifetime Achievement Award! 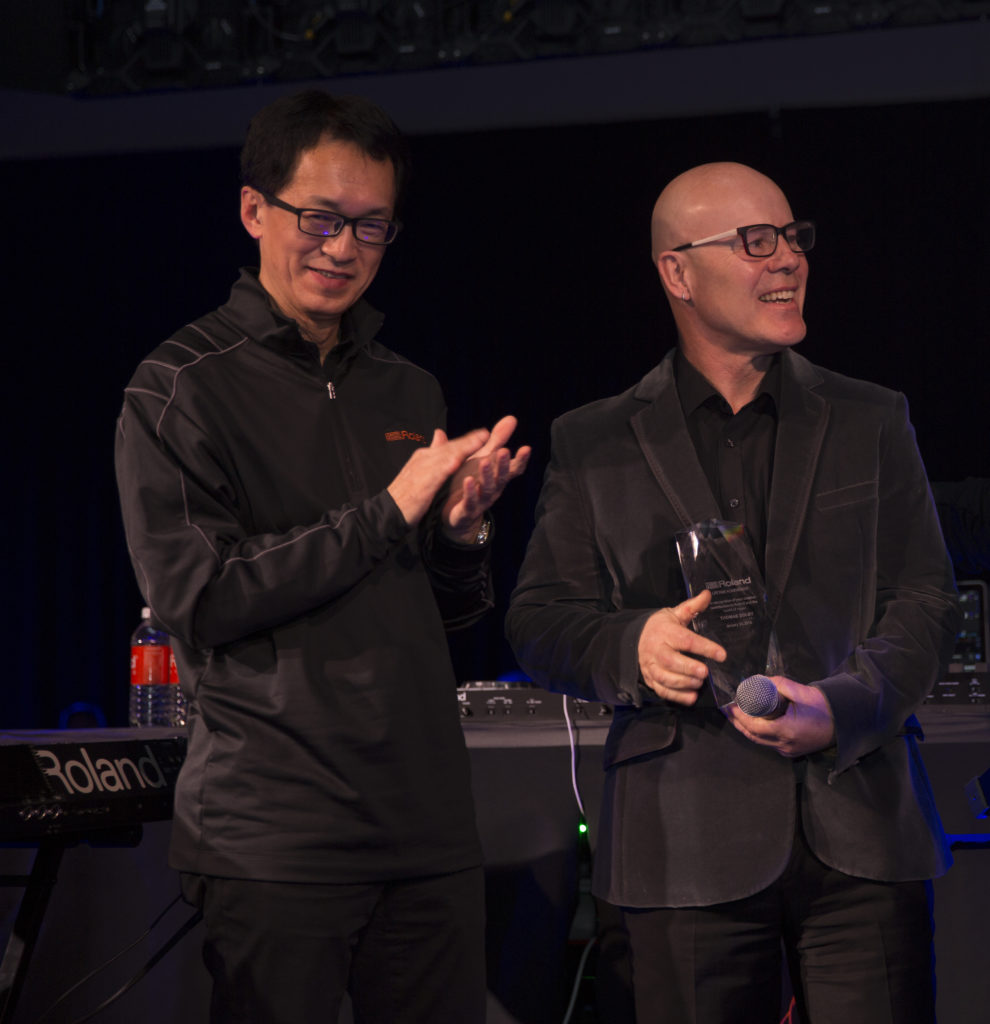 Roland and BOSS presented their third-annual Lifetime Achievement Awards to synthpop and electronic music pioneer and solo artist Thomas Dolby (Roland), and guitar virtuoso, artist, and producer Steve Vai (BOSS). The Roland/BOSS Lifetime Achievement Awards recognize individuals for their invaluable contributions to the music industry while using Roland and/or BOSS gear throughout their careers. The gala event was attended by artists, musicians, and leading journalists from the music industry.  Read the press release!

Thomas’ book is one of Amazon.com’s picks for best books in 2016! Have you got yours?